Glory doesn't think so and I agree with her. Wanting a change doesn't have to end with the death's of so many innocent people. Target those who have done wrong, who are making the community terrified of your kind. Killing innocent people only proves the Management's point - Deviants are dangerous. Compliance was more action packed believe it or not , filled to the brim of drama and many heart aches and in some cases, maybe even a few tears? The characters are fantastic - you'll find yourself becoming more connected to the characters we met in Deviants but you'll also find yourself hating some of the ones we just met.

The build up for the next book and the thought of all that's going to come just makes me giddy - I can't wait to read what will happen next. Go out and get yourself a copy of Deviants, I'm sure you'll like it and then you can move on to this book, Compliance. You'll fall in love with the characters, like I have, the story, the world the author's created and the use of your imagination - let it run wild with this book! Oh, and did I mention the fact that there's not one but TWO gorgeous guys to swoon over?

I'm looking forward to the final installment. This series is really enjoyable, so far, and would make a fantastic Hunger Games read-alike: it's a future dystopia with a strong female character who grows up in poverty and has low self-awareness; and not only that, but there's also a love triangle. 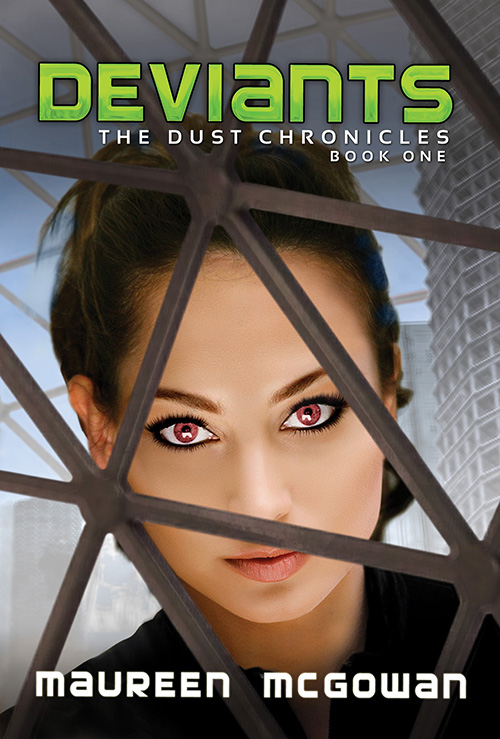 Instead of a largish empire run by a small elite city, it's more of a corporatist elite controlling life in a dome, and instead of a fight-to-the-death game, there are mutants and non-mutants. But, seriously, it hits a lot of the same buttons. I lo This series is really enjoyable, so far, and would make a fantastic Hunger Games read-alike: it's a future dystopia with a strong female character who grows up in poverty and has low self-awareness; and not only that, but there's also a love triangle.

I look forward to the next book in the series! And I was NOT disappointed. I loved the book!! I thought Ms McGowan did an excellent job progressing the story and the characters. There are so many comments I want to make, but I don't want to do any spoilers. Suffice to say, I highly recommend the book. It is YA, and I unfortuantely am not, so I'm trying to get my daughter to read it next.

My only question is Loved Compliance!!!


What a great follow up to Deviants!! I would give this book a 4. It was very fast paced.

I could feel the conflict and emotions that Glory experienced in the book. I'm so ready to find out what happens next. I am enjoying this series. Jan 02, T. It lived up to the first book. I enjoyed it very much. On July 21, A decent development, suffers from book 2 syndrome This book is a good development of the themes set out in the first book. The ideas grow and it plants the seeds that will eventually come to define the 3rd book. It was still enjoyable and expanded on the adventure story and the structure of Haven. The first book is fresh and full of new ideas.

T A decent development, suffers from book 2 syndrome This book is a good development of the themes set out in the first book. The third book is the dramatic conclusion and has all the gravitas of the finally. The second book has to do the work. The second book is often a slog for those reasons.

Still worth the time and enjoyable in its own way.

I thought it was extremely obvious that she was a deviant and what her deviance was. Would have liked it if this was at least a little hard to figure out. I will be checking out the final book in the series to see how it ends. Okay, going into book two of the Dust chronicles I was feeling very hopeful. At the end of book 1 I was just starting to like our MC and was excited to see what would happen once Glory was back in Haven this time as a spy for the Freedom Army and a recruit for the domes police system. While I really liked some of the new stuff we were introduced to, I was not happy with Glory.

At the end of the book she finally trusts in her friends and her partner that she reveals her secret and they accept it so why lie then? It's always better to tell the truth and to live with its consequences then lie to feel accepted. Jun 24, Julie Goetz rated it really liked it. Really loved the direction this book took with Glory and her plan to help other deviants.

The world building is much better in the second of the series. I felt that the book began to take on a much more original Dystopian story. I am an addict itching for more. I feel the burn. I have to know what happens next! I absolutely devoured, and enjoyed, the first book of The Dust Chronicles, Deviants.

Glory, the kick-ass Deviant heroine with the power to kill was a compelling character and her life, and escape from, the futuristic domed city of Haven was well told and engrossing. So, when offered a chance to read Compliance, the second novel, I jumped at it. I wanted to know what happened to Glory after she left her brother, father, and love interest, Burn, to re-enter Haven and rescue more Deviants.

Well, she is still kick-ass and is now learning to control her Deviant power. But, in order to save more Deviants she joined the Compliance Officer Training school. As a Comp she would have access to the government list of names of suspected Deviants and could spirit them out of Haven before they are Exed.

It sounds like a great cover story for a secret agent with personal conflicts. In COT school, Glory's drill sergeant absolutely despises her and picks on her with taunts that she will "flame out" and fail. No true reason given for his actions other than she is "too small" to become a Comp.

Her bunkmate hates her and blatantly flirts with Glory's dating partner, Cal. And when a character from Management, the alluring Mrs. Kalin, takes a special interest in Glory by calling her "the daughter I never had" and treating her to a day at the salon and clothes shopping, the reader is going to have an eye-rolling, face-in-palm fest. Then there is Cal.

Sweet, loving, supportive Cal, her government registered dating partner. Clueless to Glory's Deviant power and the truth behind her family, Cal spouts hateful government rhetoric concerning the evil of Deviants and how Haven is safe for all. This tears at Glory; Cal is her friend, and before she met Burn, he was her only love interest.

Burn knows and understands what she is, and she fell in love with that safety. If only she could tell Cal the truth.